The Truth About Cheese — Short version: It tastes good and is good for you, so keep eating it.

Journalist Travels to Ilhan Omar’s Homeland to Prove Somalia is Beautiful, Gets Killed by Terrorists — Yikes — turning “mugged by reality” into “murdered by reality.”

How They Know Invaders Will Vote Democrat — The Dems’ use of illegal immigration to gain more power is one of the most transparently brazen and galling political acts in history. They are glad to ruin a great nation just for some temporary political influence.  It is sickening.

A story from February explains why Democrats want the border open, confident that the hordes flooding across to fundamentally transform our country will reliably vote Democrat for many generations to come. The invaders’ greedy, arrogant, and utterly unjustified sense of entitlement sets them squarely at the center of the Democrat reservation. They have even sued the country they invaded: Six migrant families filed multi-million dollar claims Monday against the Trump administration over last year’s family separations, saying they need the money to pay for counseling and other medical care to heal from the “torture” they said they suffered.Funny that people come from all over the world to break into our concentration camps so that they can be tortured. Each claimant seeks $3 million.No swarm of locusts could be more rapacious.

New Bill Proposes to Teach School Kids that ‘Fetuses’ Are Living Human Beings — Great strategy.  It will help offset some of the God-mocking Leftist agenda and plant seeds of doubt about the morality of abortion, and the debate exposes pro-aborts for the anti-science Leftists that they are.

Another man wins gold in women’s weightlifting — Confused Leftists demand equal pay for unequal work (compete against men directly if you want equality!), while they should be demanding equal chromosomes for equal trophies.

Not sure why he’s getting criticized.  He didn’t say anything racist, and even if he had, they’ve called him that so long that it doesn’t matter anymore.  It is already baked into impressions of him, for right or wrong.

Somalia is indeed awful.  We went to Kenya 5 times, and over the years more Somalis came into the area and made it visibly worse.

AOC killing the Amazon deal should be great fodder for the Republicans.  Do you really want people like that running the entire country?

He reeled in the Leftists.  Pelosi is now tied to the America-haters.  Great positioning for 2020.

‘Black’ Activist Claims Trump Has Kept Him from Becoming a Pastor — Reminds of a ~1980 SNL skit where John Belushi acts like he would have been a lock for the Olympics if it hadn’t been for Jimmy Carter.

Kyle J. Howard, who ethnically is as much Caucasian as African, was raised in an affluent Atlanta suburb by two loving parents who were both attorneys. Howard was born with a silver spoon in his mouth, with all the privileges and luxuries of the upper class.However, at some point in the last several years of community activism, the racial incendiary contrived a tale of having secretly been in the Crips gang in high school and raised in the dangerous ‘hood.’ Howard claims that his girlfriend (now wife) and parents did not know about his gang affiliation and that there are no members of his gang left to substantiate his tales because they’re all dead or in prison.

Compassionate Christian Votes For Government To Steal Money From His Neighbor And Give It To The Poor | The Babylon Bee — “Christian” Left, we’re looking in your direction.

DeManson no longer has a guilty conscience whenever he sees people in need.”I don’t personally have to do anything,” he said. “The government does it for me.”The man cites the verse “somewhere in James” that says that “true religion before the Father is to forcibly redistribute money from those wealthier than you in order to take care of the poor.””If we’re not doing that, we’re not real Christians,” he added. 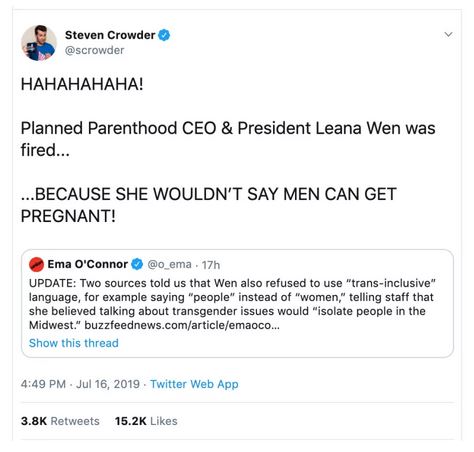 Surprise! Illegal immigration deeply unpopular with voters … in Mexico — So according to Leftist logic, Mexicans are racist against Hispanics.  Who knew?

More than 6 in 10 Mexicans say migrants are a burden on their country because they take jobs and benefits that should belong to Mexicans. A 55 percent majority supports deporting migrants who travel through Mexico to reach the United States.Those findings defy the perception that Mexico — a country that has sent millions of its own migrants to the United States, sending billions of dollars in remittances — is sympathetic to the surge of Central Americans. Instead, the data suggests Mexicans have turned against the migrants transiting through their own country, expressing antipathy that would be familiar to many supporters of President Trump north of the border.