The Molech-worshiping ghouls of the Left — including the “Christian” Left — are busy celebrating the “free” (read: tax-funded or government coercion-funded) abortions that will just happen to kill minorities at a disproportionate rate: Governor of Oregon Holds Ceremony to Celebrate Law Making Abortion Free in State.  And note the skin color of those celebrating . . . 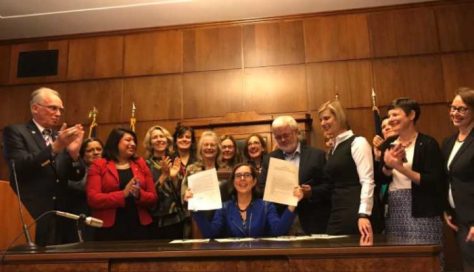 When you use the force of government to increase abortions you can no longer pretend to be pro-choice.

This came with the usual pro-abortion fallacy-fest.

To lead productive and thriving lives, Oregonians must have the ability to control their bodies and make informed decisions about their health care,” she said in a statement. “I am proud to sign legislation that expands access to basic reproductive health services for all Oregonians regardless of where they live, where they come from, or how they identify as a person.

So to improve your life you need to be able to kill your children to their 1st breath and to have someone else pay for it.  Check.

The “how they identify as a person” is comical.  Apparently they had to ensure the bill covered women who pretend to be men yet still want to kill their children.

And as always,  “Reproductive health services” is a false, Orwellian, anti-scientific term. It applies to birth control, not abortion, because abortion destroys a human being who has already been reproduced. That is a scientific fact confirmed by any mainstream embryology textbook and basic logic. It is a deadly and evil phrase. Yes, they have a right to reproduce, but no, they shouldn’t have the right to kill human beings who have already been reproduced.  Never let pro-aborts get away with using that phrase.

According to the Washington Times, those in attendance “regularly broke into rousing cheers and applause.”

It allows an exemption for religious businesses and nonprofits . . .

That will last about 15 minutes, because if killing your children to their 1st breath for “free” is really a right then how dare anyone limit that right?!  But don’t worry, because the state will make your neighbors pay for the murder:

Employees can still obtain the desired contraceptives and abortions . . .

They falsely claim that women have to be able to murder their children to be able to work outside the home and that even if it was true then it would justify child-killing.

Democratic presidential candidate Hillary Clinton similarly said that she believes legalizing abortion has helped to keep women in the workplace, and thus has aided the economy.

Well, OK, then, continue the slaughter.  And they say Republicans are greedy?!

2 thoughts on “Leftists — including “Christian” Leftists — are pro-abortion, not pro-choice”