The Left has been despicable on politicizing the Ebola situation and pretending that the mean old Republicans didn’t give them enough money.  But their budget increased over the years and their list of wasteful projects is long.  In the business world you get laughed at and then fired if you waste money on silly things and don’t spend it on your most important projects.  Via Lesbians Got All the Ebola Dollars, But Blame the GOP:

Democrats have rushed out of the gate with an attack ad against Republicans claiming if only we had spent more money, we would be able to solve the Ebola situation.

It’s a defensive ad that reeks of desperation. At a time when more and more Americans, including millennials, are concluding government just doesn’t work, it probably won’t be effective. And Republicans can respond in kind.

For example, instead of studying Ebola, the National Institutes of Health were studying the propensity of lesbians to be fat.

Then there was the money for a study on wives who calm down quickly.

And the Centers for Disease Control spent its budget on gun violence studies on order of the President as part of his agenda to curtail the second amendment.

The CDC also spent its money to survey what bus riders thought of HIV videos.

The fat lesbian thing is particularly galling, especially in light of Houston’s own fat lesbian mayor trampling religious freedoms and trying to intimidate pastors.  Those of you who are long time readers know that I never make fun of the appearance of others (really, read all 3,000+ posts).

But I could have saved the NIH a lot of money. Lesbians aren’t fat because they are lesbians, they are sometimes lesbians because they are fat.  Remember, people go LGBTQX for many reasons: Plain old rebellion, sexual abuse and bad relationships.  But it is sometimes from an inability to connect with the opposite sex — at least at the level they think they deserve.  I’ve known guys who were hetero but kept aiming too high (sorry, it is a fact that 8’s generally don’t date 5’s . . . ask Ron Swanson). Then they decided that they were totally gay and that was the reason.  Uh, sure. 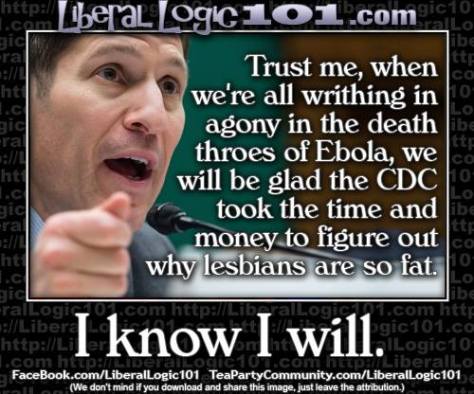 7 thoughts on “So if Houston’s mayor wasn’t overweight we’d have cured Ebola?”