Nearly all gender-selection abortions kill females for the sole reason that they are female.  It is the ultimate misogyny.  Of course, all abortions (except those that save the life of the mother) are immoral, but any time we can limit any abortions that is a victory.

The South Dakota Legislature has given final approval to a bill that bans abortions sought because of a fetus’s gender.

Supporters say a pregnancy should not be terminated because parents don’t like the gender of a fetus.

But opponents say the measure is unconstitutional.

Live Action and Lila Rose have done a great job of exposing how gender-selection abortions are done not just in China and India but in the U.S., all with the blessing and support of “feminists.”

Even if this is overturned because of faux Constitutionality reasons, this is still great politics.  It highlights that abortion kills real human beings, and how some are deemed worthy of life and others are not.  And it especially exposes the false “war on women” meme when the pro-aborts aggressively fight gender-selection abortion bans.  It is hard to claim you are pro-women when you fight for the right to kill them.

We should put forth similar legislation banning abortions that would kill gays or those with a predisposition to be gay.  Yes, I know they aren’t “born that way,” but there is nothing wrong with using the false arguments of the Left against them.  Interestingly, when I’ve asked Leftists if they would support such a ban they have always chosen abortion over gays.

Passing even selective bans on abortion, such as those against women or gays, is a great opportunity to highlight who really has the best interests those people at heart.

Let’s continue to be as innocent as doves and as wise as serpents when protecting innocent human life.

P.S. Also remember that abortionists like Planned Parenthood hide statutory rape, incest and sex trafficking. Is it good for women if you hide these crimes so you can make money off abortions?

Shocking, I know.  It turns out that organizations who kill innocent but unwanted human beings for a living and hide statutory rape don’t mind lying to protect their funding.

When faced with losing Federal funding, Planned Parenthood launched a full-scale, deceptive effort to mislead people into thinking that all sorts of important medical services would be lost if that happened.  The deception was done in partnership with with the Obama administration and the mainstream media.  The CEO of PP and various legislators and supporters claimed that Planned Parenthood did mammograms and that other vital services would be lost (apparently Walgreen’s is all out of condoms) if funding was cut.  Those were lies.

Undercover phone calls released today show Planned Parenthood of Indiana clinic staffers at various locations admitting Medicaid patients have only to look around the corner to get healthcare.

But a new Live Action investigation shows the reality is quite the opposite….

In reality, according to PP’s own statistics, it sees only 1% of all Medicaid patients in the state. (PP states it sees 9,300 IN Medicaid patients, while IN has an enrollment of 1,022,700.)

Also see this Planned Parenthood overview for how, in addition to being the top destroyer of human life in the country, they systematically hide statutory rape and sex trafficking (when not teaching your kids to ignore the perspectives on human sexuality that you and your religion hold).

This lie is actually pretty tame relative to their serial hiding of statutory rape and covering up for sex traffickers (Oh, and the fact that they destroy unwanted human beings for a living).  But it is still a lie. They don’t do mammograms anywhere.

Memo to those who want PP funded: Open your own wallets, just like pro-lifers do for crisis pregnancy centers.  If you think they are so swell, then spend your own money.

This time LA fact-checked CEO Cecile Richards’ recent claim on the Joy Behar Show that if PP is defunded “millions of women in this country are going to lose their health care access, not to abortion services, to basic family planning – you know, mammograms, cancer screenings, cervical cancer.”

No. An LA actor called 30 PPs in 27 states to always get the same answer: No mammograms here.

False teachers like Chuck “Jesus is not the only way” Currie are very proud to defend Planned Parenthood.  They deliberately ignores things like this:

At Live Action we have investigated Planned Parenthood’s failure to  report child sexual abuse to law enforcement and have caught them on camera failing to properly report over 14 times (see Mona Lisa and Traffick project). Some have asked, are there real cases of this happening as well? The answer is yes. This post highlights the first of many real cases that we will be highlighting on the coming days.

Update: Go here to sign a petition to de-fund Planned Parenthood, among other things.

This is a quick must read: Lila Rose: The top six Planned Parenthood deceptions in response to our exposé | LifeSiteNews.com.  I left a few snippets in the list below.  See the link for the full responses.  Planned Parenthood and its apologists are working overtime to minimize this.  Let’s keep it out there as much as possible.  The more the middle ground knows the more likely we’ll get PP defunded.  Be sure to flag it to theological liberals, who typically give their full support to PP.

Deception 6) “We reported this to the FBI”

If Planned Parenthood really cared about reporting potential sex traffickers to authorities, they would have called police while the pimp was in the clinic, or immediately after. Not wasting a minute. Planned Parenthood, where are the reports from the now SIX clinics we’ve released, that you immediately called the police?

Why did all your staffers, instead of refusing service or gathering information from the pimp about his sex ring to inform authorities, GIVE the pimp information about how to access the Planned Parenthood system for secret services?

Deception 5) Live Action Videos Are All “Doctored” and a “Hoax”

Planned Parenthood, if you really think our videos are “fake”, “doctored” and a “hoax”, why did you yesterday claim that you will be retraining your entire staff of 11,000?

A final question: How exactly will Planned Parenthood be “training” it’s staff? Will the training be a special seminar on how to recognize Live Action cameras?

Deception 2) This is an “isolated incident”

A favorite of Planned Parenthood’s. Every time Live Action releases a video (and we’ve released over 16 now), it is “an isolated incident”. Let the facts speak for themselves. Look at the evidence.

Deception 1) We have a zero-tolerance policy for abuse, and you should trust us

If anyone can still believe this, I don’t know if there is any evidence in the world that will convince them otherwise. 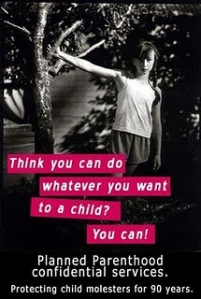 And the mainstream media will look the other way.  Again.  And Congress will keep giving them hundreds of millions of your tax dollars.  See After all, sex traffickers need Planned Parenthood, too – Jill Stanek.

This time PP is trying to get ahead of the embarrassment, but they are fumbling because they don’t know the content of the videos.  Apparently they don’t just aggressively and systematically hide statutory rape, they are willing to hide underage sex workers (slaves would be a more accurate term).  Why do people expect decent, law-abiding behavior from those who kill innocent human beings for a living?

P.S. I agree with Planned Parenthood’s view: “An abortion kills the life of a baby after it has begun” At least that was their view in this 1964 advertisement. Did they learn anything about science in the few years after that when they changed their minds? Of course not. Science couldn’t be more clear: A new human being is created at conception.

(Got the picture from Glenn)