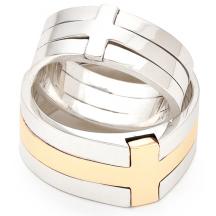 A favorite updated for your reading pleasure.

According to the Bible, a Christian should only marry a person who is:

Item 3 used to be self-evident (and still is, for most of us), but we had to add it to the list a few years back.

That’s it. Despite the stereotype that the Bible is just a giant rule book, many things are very simple.

The key constraint is usually item 1: The future spouse must be a Christian.  Ignoring God’s clear direction on this is a bad idea.  Just because God might ultimately bless it doesn’t mean He is obligated to.  That’s why it is called grace.  (Full disclosure: It is possible that my wife violated guideline #1 in marrying me.  Fortunately, she lost the receipt so she can’t return me now.)

“Missionary dating” (that is, dating someone in hopes of converting them) is un-Biblical, as it is based on false pretenses.  God might bless your relationship and your spouse might become a Christian, but there are no guarantees of that in scripture.  You just don’t want to start your marriage in clear violation of one of God’s commands.

Marrying someone outside your faith is problematic.  You will have vastly different views on what should be the most important part of your life.  It will send a horrible message to your children, namely that you and your spouse thought it was important to agree on where to live, how many kids to have, where to vacation, what to eat, etc., but it wasn’t important for you to have even a general agreement on who God is and how that should impact your lives.

A good Christian friend realized the error of his ways and broke off a relationship with a non-Christian.  It was pretty painful, but certain things validated why he needed to make the break: She specifically tempted him to deny his God, “Just this once” – proof enough as to why such relationships are a bad idea.

Sadly, I know countless church-going parents who don’t teach their kids to only date Christians, and who think little or nothing of their kids marrying non-Christians.  And countless pastors officiate at these ceremonies without ever counseling people about what God says.

Of course, just because it is moral to marry someone doesn’t mean it it wise.  There is a lot of wisdom and advice about how and whether to marry in the book of Proverbs and in 1 Corinthians 7, among other places.  These passages were directed to Solomon’s son but they apply to both sexes.

Proverbs 12:4 A wife of noble character is her husband’s crown, but a disgraceful wife is like decay in his bones.

Proverbs 21:9 Better to live on a corner of the roof than share a house with a quarrelsome wife.

Proverbs 21:19 Better to live in a desert than with a quarrelsome and ill-tempered wife.

Proverbs 27:15 A quarrelsome wife is like a constant dripping on a rainy day;

Proverbs 31:10 A wife of noble character who can find? She is worth far more than rubies.

I’m usually pretty liberal (seriously!) about Bible translations.  I prefer the ESV now, but have read the NIV the most and the Living Bible was the first one I read all the way through.  The NASB is a more literal translation and is great for zeroing in on key words.  In general I just encourage people to read it and not just talk about reading it.

But I’ve never liked The Message translation.  It is way too “cutesy” for me.  And the more I learn about it and the author, the less I like it.  Here are some more reasons to avoid it, via Sola Sisters: The Message “Bible” Inserts Earth Reverence, God of “Green” Hope.

A generation has been raised on this disturbing “paraphrase” of the Bible. This is the primary version so many now rely on, and nationally known preachers quote from it with regularity. Yet, as we have seen, The Message flat out omits the sin of homosexuality from several key passages. We see this in 1 Corinthians 6:9-11, and also in 1 Timothy 1: 8-11.

Does the acceptance and use of The Message explain why many Christians are lukewarm on the issue of homosexuality? Certainly The Message is not the only factor–we dwell in a pro-homosexual media/culture–but place this “Bible” in a person’s hands and it can have, over time, significant influence. How can we understand God’s Truth when Truth is no longer there to be read?

“My son, give attention to my words; Incline your ear to my sayings. Do not let them depart from your sight; Keep them in the midst of your heart.” (Proverbs 4:20-21)The beloved author of The Message, Eugene Peterson, has now endorsed two heretical books: The Shack, and Rob Bell’s sly ode to universalism, Love Wins. The Message, bluntly stated, seems written to make Christians less knowledgeable about the Word of God. While that may seem a strong comment, please consider what Eugene Peterson himself said about the Bible:

“Why do people spend so much time studying the Bible? How much do you need to know? We invest all this time in understanding the text which has a separate life of its own and we think we’re being more pious and spiritual when we’re doing it….[Christians] should be studying it less, not more. You need just enough to pay attention to God….I’m just not at all pleased with the emphasis on Bible study as if it’s some kind of special thing that Christians do, and the more the better.” [1] (Bold mine)I believe The Message is forerunner to a christless, sinless bible that will be used by the false church. There will be a “christ” mentioned, but not our Christ. Not the sinless Savior of humanity. Sin will be addressed, of course, but perhaps more in line with the Alcoholics Anonymous generic theology of “wrongs” and “making amends.”

Homosexuality will be perfectly acceptable, even sacred. And nature, the earth itself, will be worshiped. We have already addressed Eugene Peterson’s removal of homosexuality and other sins in 1 Corinthians 6:9-11, but healso inserts the phrase “use and abuse the earth,” something the Lord did not place there at all.

“Don’t you realize that this is not the way to live? Unjust people who do not care about God will not be joining in his kingdom. Those who use and abuse each other, use and abuse sex, use and abuse the earth and everything in it, don’t qualify as citizens in God’s kingdom. A number of you know what I’m talking about, for not so long ago you were on that list. Since then, you’ve been cleaned up and given a fresh start by Jesus, our Master, our Messiah, and by our God present in us, the Spirit.” (Bold mine)Did you catch that? Peterson’s version claims those who “use and abuse the earth” will not be saved!

“Or do you not know that the unrighteous will not inherit the kingdom of God? Do not be deceived: neither fornicators, nor idolaters, nor adulterers, nor effeminate, nor homosexuals, nor thieves, nor the covetous, nor drunkards, nor revilers, nor swindlers, will inherit the kingdom of God. Such were some of you; but you were washed, but you were sanctified, but you were justified in the name of the Lord Jesus Christ and in the Spirit of our God.”You will not find this apparent form of earth-reverence in 1 Corinthians 6:9-11 in any reputable translation of the Bible. It simply is not there.

Read the whole post for more of the “earth worship” problem.

In a move that should surprise no one, Peterson is now a loud-and-proud supporter of oxymoronic “same-sex marriage.”

Another denomination goes apostate, mocking the word of God and loving the world.  Via Stand to Reason Blog: What the Bible Teaches about Homosexuality:

The Presbyterian Church (PCUSA) has voted to ordain practicing homosexuals.Before the amendment, the constitution required clergy to live “in fidelity within the covenant of marriage between a man and a woman, or chastity in singleness.” The amendment instead requires ministers to “submit joyfully to the Lordship of Jesus Christ in all aspects of life.”This is sad news indeed. Somehow the PCUSA has decided that homosexual conduct is consistent with submission “to the Lordship of Jesus Christ in all aspects of life.” Even though the Bible unambiguously prohibits homosexual behavior, the PCUSA is now claiming to submit to Christ’s Lordship while setting aside Christ’s teaching as revealed in scripture (Rom 1:26–27; 1 Cor 6:9; 1 Tim 1:10). This shows that the real issue here is biblical authority—something thatwas set aside a long time ago in many churches of the PCUSA.

The conventional wisdom of macro-evolutionists is that they are on the side of science, facts, reason and logic and that Christians are not.  I addressed that falsehood here, but wanted to recap a conversation that is a good representation of many experiences I’ve had.

An educator with a master’s degree (though not in science) was trying to gig me about an initiative in his state that would have required criticisms of Darwinian evolution to be addressed in the high school curriculum.  It was clear that he strongly opposed it and that he (correctly) assumed that I favored it.

I know when I’m being baited, so I calmly and briefly replied with three things:

Considering that he brought up the topic, it was now his turn and obligation to reply.  He could have tried to refute any of my points with facts and logic or even started fresh with his positions.  But here’s the complete transcript of what I got:

[Long pause] “I can see you’ve studied this issue more than I have.”

That’s it.  That was the complete response of Mr. Science Person.  As much as I appreciated the concession speech, I rightly surmised that he had no intention of doing more research or changing his position.  But I’m the dogmatic one, right?

But it does prove that he lives in Stereotype Land.  He isn’t pro-science, he’s just a pro-atheist cheerleader.  Despite his education, he knew nothing about what he was advancing and nothing about the opposing arguments.  He isn’t skeptical, he’s firmly entrenched in his dogma.  He isn’t a free-thinker, he’s picked a worldview and is deliberately ignoring contrary evidence.

I find his approach to be the rule, not the exception.

Contrast that with the Christian worldview, partly reflected in passages like this:

Acts 17:11 Now the Bereans were of more noble character than the Thessalonians, for they received the message with great eagerness and examined the Scriptures every day to see if what Paul said was true.

1 Thessalonians 5:21 Test everything. Hold on to the good.