Safeguards schmafeguards: “a little wave and they were gone” – the creepy, evil and inevitable expansion of euthanasia.  It isn’t a slippery slope in the fallacious sense.  It is a “cliff” in the sense that the reasoning used to justify the original euthanasia exceptions (reducing suffering, some lives not worth living, etc.) provide the foundation for the scope creep.

[Two 45 yr. old brothers born deaf] chose to be euthanized when they learned they were going blind. Dufour gave them each a lethal injection 11 days before Christmas.

In 2000, Holland became the first country in the world to legalize euthanasia. Two years later, Belgium followed suit, legalizing euthanasia for people over 18. The law requires that the person wishing to end his or her life is able to make that wish clear, and a doctor must judge that the person is suffering “unbearable pain.”

It’s worth paying attention to how euthanasia works in countries where it’s legal. Because with the legalization of assisted suicide in Oregon, Washington and Montana, we’re on that  road as well.

And how it works is that once a law is in place, the safeguards in it are quickly swept aside–or simply ignored.

Euthanasia: an “ever-widening interpretation” of the law

Notice that the Belgian law stipulates that the person must be suffering unbearable pain. The twins were neither terminally ill, nor apparently in any physical pain. They probably were depressed–understandably–at the thought of losing their sight.

But since when is depression a capital offense?

And now the Belgian government is considering a law that would extend legal euthanasia to children–”if they are capable of discernment or affected by an incurable illness or suffering that we cannot alleviate”–and people with dementia.

An incurable illness. Like, say, blindness? Epilepsy is incurable, too, and dwarfism, and developmental disabilities, and a host of other conditions.

A civilized society offers comfort, help and care in such a situation. One descending into barbarism offers simply death instead.

Coca-Cola has a new anti-obesity commercial.  Oddly, there are no fat people in it.  Friendly reminder: If you exert less effort than people have typically done throughout history and you consume lots of caffeinated sugar water instead of regular water, bad things might happen.  Sodas should only be used as treats, never a part of a regular diet.

Chicago United Methodist Bishop Misrepresents Denomination’s Position – she lobbies for “same-sex marriage” even though her denomination explicitly opposes those.

She isn’t qualified to be a Bishop. Or a pastor. Or a lay leader. Or even a member. She is on the anti-biblical side of the most straight-forward and important issue in her denomination today (because it is splitting the church). She is shaking her fist at God 24×7 in rebellion and mocking her employer. It is as if a salesman for HP publicly said that people should buy Dell. Good for them to expose how deceptive she is being.

NAIVE LEGISLTORS ON GUN CONTROL – Mike has a great summary of their mistaken positions.  Sample:

Hey, innocent people have been dying since the dawn of time; and they always will.  It’s part and parcel to the fallen nature of humanity.  I wonder if cavemen put strict stick and rock possession laws on their books when there were mass stonings and clubbings?  No, they probably served swift justice on the violators.
By the way, do legislators recall the details of the 9/11 attacks?  What brought down those twin towers in New York…airplanes.  Not guns — not clubs or rocks — but airplanes.  And what brought down those big airplanes?  Not guns.  Not potato cannons.  But box cutters.  When used skillfully, darn near anything is a viable weapon.

Also keep in mind that those shouting for no more innocent loss of life are 99% likely to be pro-abortion.

Let Freedom Ring – Great points about how the inability of any authentic (read: Bible-believing) Christian to say the inaugural prayer is not such a bad thing.  Now people can quit kidding themselves that the opposition has any desire for compromise or rationality.  Pick a side and go with it.  Here’s part of it, go read it all.

Let us be free from the false hope that heroic deeds and quiet agreeableness can atone for the sin of orthodox conviction.

Let us be free from the wishful thinking that good works and good manners can appease the Great God Tolerance.

Let us be free from the misplaced assumption that faithfulness to God can go hand in hand with worldly congratulation.

If it is “anti-gay” to believe that the normativity of male-female sexual union is taught by nature and nature’s God then let us wear a Scarlet Letter around our necks. Christ bore much worse.

If the culture of free love is going to hate those who believe marriage was made with God-given limits then let the opprobrium fall on us. We will despise the shame.

If henceforth we shall be considered the scum of the earth for believing what the Church has taught for 2000 years then let us be the scent of death to some. We shall be the aroma of life to others.

And lest anyone think this is a call to arms or a manifesto of malediction, it is not. If we are reviled, we shall not revile in return. If we are hated we shall pray to God for more love. If we are excluded from polite society, we will still include all Christ-exalting, Bible-believing, broken hearted sinners in the fellowship of the redeemed. And if we are esteemed by some as better off dead, we will not cease to offer the words of life.

There are likely far bigger disappointments to come than the one that dropped last Thursday. We did not choose this culture war and it is not about to leave us alone. The media, the academy, the government, the libertine elite–they may sully our reputation and shame our convictions, but they cannot steal our joy. We can pray more, sing more, and smile more than any of the party-goers making mud pies in the slums. We do not have to fit in down here so long as we fit in up there. We do not need a president’s approval if we have the affection of our King. Our hearts and our Bibles are wide open. Our salvation is firm. Let freedom ring.

Some excellent time management tips – I’d summarize lots of them with the O-H-I-O theme: Only Handle It Once.  Have a system to do something with whatever email or paper you come across.  I do that well sometimes.  When I don’t, I waste lots of time.

What should Christians think about global warming?  A good list of questions to ask.

I would add one: Are the people advancing the global warming / global climate change policies profiting from them?

A great set of graphs showing the growth of government spending and who really pays taxes — All the Numbers You Always Wanted on Government Spending (But Were Afraid to Ask).  Here’s an example.  Anyone think this is sustainable?

In other words, in just a few generations, the government has gone from well under a tenth to representing more than two fifths of all economic activity in the country. 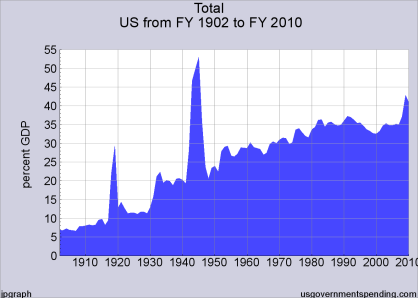