I have a Kairos Prison Ministry weekend coming up on March 12-15.  If you are so inclined, you can sign up for the prayer vigil here.  The participants really enjoy seeing a “prayer wheel” showing the first names of people praying for them around the clock.  Your name and location will not be visible to the general public.  Kairos does powerful things to share the love and truth of Jesus and to transform lives, and it drives a significant reduction in recidivism.

Bloomberg Explains Why He Gets to Have Guns, Not You — The only thing worse than his cartoonish hypocrisy (he has greater risks than you, so yours aren’t worth defending against!) is that so many Leftists are fine with his “logic.”

I watched one of Trump’s rallies for the first time (well, most of it).  Wow.  Stronger pro-life message than I’ve heard any other Republican candidate make.  So many great things – the judges, border control, low unemployment, criminal justice reform, ending sanctuary cities, recognizing Israel, better trade deals, better military, real VA reform and improvements, lower poverty rates, and so much more.  And shouldn’t the Left be cheering that Trump hasn’t started any wars and is winding down nearly 20 years of our presence in Afghanistan?

I think Trump’s “promises made / promises kept” slogan is perfect.  That should really resonate with the middle ground who are so used to politicians lying.

The “never Trumpers” who are supporting the Democrats should be dismissed forever.

He’s so polished and practiced at these things now and is obviously just having a great time.  I think the debates will be very interesting this year. 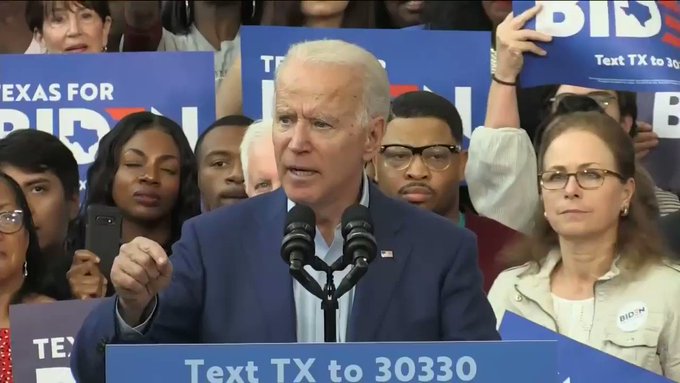 This is who the Dems  and their wholly-owned media are working overtime to be their nominee, including buying off / threatening Buttisex and Klobuchar to drop out just before Super Tuesday when they had already spent money on their campaigns (don’t those donors feel stupid now!).  Normally I ignore slips of the tongue (the more we talk, the  more likely those are, and politicians talk a lot).  But this guy is out of control.  That said, I think his gaffes are already factored in.  It won’t sway voters.  Only focus on his corruption and terrible political views.

And this . . . yikes!  Biden says the Robert Francis O’Rourke — the guy who loudly and proudly said he’ll confiscate your guns — will take care of the gun problem.  And of course “Beto” pandered by speaking in Spanish.  Pro-illegals and anti-gun –  and Biden loves him!

The Republican ads write themselves: Just show Beto saying, “Hell yes I’ll take your guns!” then this clip from Biden.

Joe wants to take away Americans’ guns just as badly as Beto!

Lori Lightfoot Unapologetic After Enabling Rape of 3-Year-Old Girl — Mayors like this aid and abet all sorts of criminals, including this rapist.  She should be in jail.

“They’re critical because we have said very clearly we are a welcoming city, a sanctuary city. Chicago Police Department will not cooperate with ICE on any immigration-related business,” she said. “And that’s affected their ability to conduct immigration raids across the city. But that’s exactly our intention. We have to make sure our police department is seen as a legitimate force in all our communities.”

Finland imports countless migrants who rape a lot.  Finland spends taxpayer funds for nonsense like this, as if that will stop a rapist.  This is what you get from the Left.

My home town has launched a 2,5 million euro project called Safe Oulu that aims at combating the (migrant) rape crisis.

This is where the money goes.

At least, be kind and lobotomize me so I won't have to live with this image in my head. pic.twitter.com/NuAPAS1UQF

More here.  Muslim migrants have led to rape epidemics, but the Left is more concerned about those pesky stereotypes.

And he was a Democrat.  Today they’d call him a fascist.