Good News! God Does not Love You Unconditionally — He loves believers steadfastly.  We went to a church before I was a believer (Disciples of Christ – my parents have always belong to that denomination) and the pastor preached the “God loves you unconditionally” theme every week and even put up a billboard with that lie.  I could imagine all the pagans thinking, “Great, He loves me unconditionally – no need to repent and believe or go to that church to learn more!”

How perfect is this? Kamala Harris got beat by a gay white guy, a fake Cherokee and a socialist Jew. Trump couldn’t have planned it any better as a way to inflame racial paranoia in the African-American community. I’m sure Vladimir Putin must be delighted by this news . . .

So the Left – including the media – is completely racist!

Humorless scolds.  Pure self-parody: Melinda Gates get rich by marrying white male tech geek Bill Gates then spends his money acting like it is oppression because women don’t choose STEM degrees.  And she got a bunch of bitter, irrational, un-funny people to make a video where the premise is that it will take 208 years (note the precision!) for women to be “equal.”  The only funny parts are how the dislikes on the videos are vastly higher than the likes and that they had to turn the comments off. 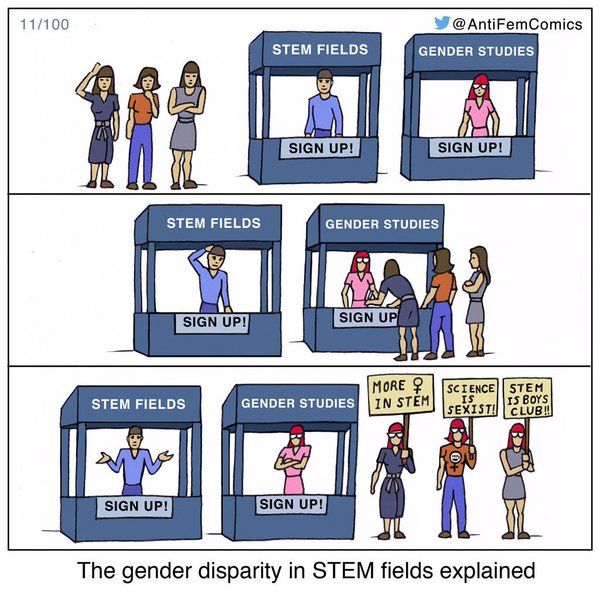 SPLC’s list may have contributed indirectly to a terrorist attack in 2012, when a gunman attacked the Family Research Council. The shooter said he had found the name on the SPLC’s website and had wanted to attack them in a blow for LGBT rights. At the time of the shooting, the terrorist had over a dozen Chick-fil-A sandwiches on his person.

Andy Ngo Suspended From Twitter for Stating Facts — Ngo’s thought crime was tweeting this: “The US is one of the safest countries for trans people. The murder rate of trans victims is actually lower than that for cis population. Also, who is behind the murders? Mostly black men.”  But these ignorant and/or malicious and/or cowardly Leftists pretend that if you don’t completely cater to these mentally ill / sinful people that they’ll all get murdered tomorrow.

These people really need Jesus.  Interesting that he noticed how the LGBTQX designations are part of this, as people are desperate for anything that makes them feel special.