I figured out why people take selfies at a down angle. 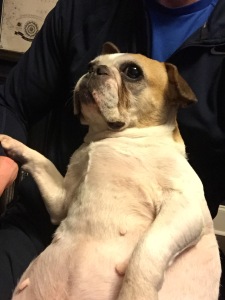 Opinion: Kanye’s new album is explicitly, unabashedly, amazingly Christian — I take the same approach to his conversion as anyone else’s: Glad to hear it, but let’s see how it plays out over time.  His music isn’t my genre (shocking!) but I listened to this and enjoyed a few of the songs.

Welp. It wasn’t a marketing stunt.

Like, more Christian than the stuff you hear on K-Love. The only thing not Christian about this album is the super high production quality.

We could get into the deeper roots of U.S. policy failures in the Middle East over the past 30 years, an analysis which would implicate both Bush administrations as well as Obama and Clinton. It was a bipartisan failure over many years that produced the dangerous chaos that Trump inherited, and the bureaucratic elites of the “Deep State” were horrified that this amateur outsider would be able to undo the policies they had implemented. And yet, despite every effort to sabotage his administration, Trump continues to gain victory after victory.

Three Bad Arguments for Lady Preachers — “But but but they are gifted!”  Uh, not according to the Holy Spirit’s definition.  And isn’t it an odd “coincidence” that denominations with female preachers are theological train wrecks on a host of issues?

The Holy Spirit, who is the author behind Paul’s statement that women should not teach or have authority, will not lavish the spiritual gift of “Pastor-Teacher” upon those that are forbidden from the office. This is merely a case of misunderstanding what spiritual gifts are.

Edward Snowden searched the CIA for evidence of an extraterrestrial coverup, found nothing  — Yep.  Once again . . .

Lisa Simpson: Dad, according to Junior Skeptic Magazine, the chances are a 175 million-to-one of another form of life actually coming in contact with ours.

A harrowing account from inside China’s reeducation camps — LeBron and the rest of the Left could not be reached for comment.

Moloch Announces Forcing Your Kids To Become Transgender Is Acceptable Form Of Sacrifice | The Babylon Bee — Sad but true.  No surprise that the “Christian” Left is completely supportive of this madness.

WASHINGTON, D.C.—The ancient god Moloch has announced that in lieu of the actual blood sacrifice of your children, you can now simply force your kids to become transgender as an alternative.

“Honestly, I still prefer killing your kids in ritual sacrifice or aborting them,” he said at a press conference. “I guess I’m old-fashioned like that. But coercing your kids into undergoing harmful surgery and hormone treatments works just as well, I suppose. As long as you’re sacrificing your kid’s future to the progressive, humanistic agenda, it doesn’t matter one way or the other.”

Moloch said that parents who encourage their young children who haven’t hit puberty yet or started thinking about sexuality at all to think about changing genders will be under the protection and favor of his evilness. “I am appeased by such sacrifice. A child’s life is ruined so that a parent may appear woke in the eyes of her friends—truly a diabolical ritual that I wholly approve of.”

Two 17-year-old boys accused of harassing four African-American middle schoolgirls — using racial slurs and urinating on one of the victims — are facing charges including bias intimidation and lewdness. …Police say the boys are of Indian descent.While it’s tempting to see the reported ethnicity of the boys suspected in the assault as complicating the story and raising questions about whether the assault should be thought of as racist, I look at it through a different lens. Instead of asking what the boys’ reported racial identity tells us about the nature of the attack, we should see the boys as enacting American whiteness through anti-black assault in a very traditional way.