Lots of bad news in a fallen world, so you need a picture of Daisy, our French Bulldog, rolled up in a blanket.  She actually seemed to enjoy it.

And here she is free-ranging.  Sort of. 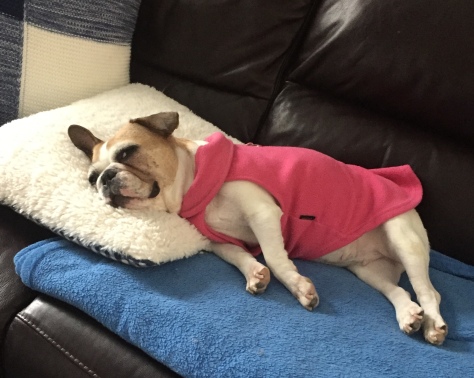 Rashid Tlaib, Hate Hoaxer — She has publicized four hate hoaxes and offered zero retractions when they were proved false.  Why would anyone trust her on anything?

Gay Advocacy Group Says Hillsong Leaders Are Privately Gay-Affirming, But Won’t Publicly Admit It — Hillsong is already pro-LGBTQX in a stealth way, and will be publicly pro-perversion in about 15 minutes.  Like so many before them, they’ll just wait until the most financially advantageous moment to get “woke.”

Video: Pastor Robert Jeffress Explains that Democrats Worship Demon God, Molech — Good for him!  I’ve been saying the same thing for a long time (ex. The “Christian” Left: Molech-worshiping ghouls | Eternity Matters).  I even have a text-expanding shortcut for that phrase.  At the suggestion of a friend, when I type Hillary Clinton’s initials it just “happens” to spell out Molech-worshiping ghouls.  Gotta love PhraseExpress.

Gee, I wonder why the NYT led with the races of the individuals in the original story then “forgot” to include them in the correction?  Nothing to see here, folks.

*Yeah, I know they abandoned him long ago.

Absolutely, Let’s Have An Impeachment Trial | The American Spectator — Bring it!  Short version: A trial would mean getting all the Democrats’ illegal and treasonous actions out in the open, with massive media coverage.

3. However, during the trial, and this is what no one is thinking about right now, the President’s attorneys will have the right to subpoena and question ANYONE THEY WANT.. That is different than the special counsel investigation, which was very one-sided. So, during the impeachment trial, we will be hearing testimony from James Comey, Peter Strzok, Lisa Page, Bruce Ohr, Glenn Simpson, Donna Brazile, Eric Holder, Loretta Lynch, Christopher Steele, Hillary Clinton, John Brennan, James Clapper, and a whole host of other participants in this whole sordid affair and the ensuing cover up activities. A lot of dirt will be dug up; a lot of truth will be unveiled. Finger pointing will occur. Deals will start being made, and suddenly, a lot of democrats will start being charged and going to prison.All this, because, remember, the President’s team will now, for the first time, have the RIGHT to question all of these people under oath — and they will turn on each other. That is already starting.

4. Lastly, one more thing will happen, the Senate will not convict the President. Nothing will happen to Trump. Most Americans are clueless about political processes, the law, and the Constitution. Most Americans believe that being impeached results in removal from office. They don’t understand that phase 2 is a trial in and by the Senate, where he has zero chance of conviction. Remember, the Senate is controlled by Republicans; they will determine what testimony is allowed — and **everything** will be allowed, including: DNC collusion with the Clinton campaign to fix the election in favor of Hillary, the creation of the Trump dossier, the cover up and destruction of emails that very likely included incriminating information. They will incriminate each other for lying to the FISA court, for spying and wiretapping the Trump campaign, and for colluding with foreign political actors, especially George Soros. After the Senate declines to convict the President, we will have an election, and Trump will win. It will be a backlash against democrat petulance, temper tantrums, hypocrisy and dishonesty. Even minorities will vote for Trump, because, for the first time, they will see that democrats have spent 2+ years focused on maintaining their own power, and not doing anything at all about black murders in Chicago, homelessness, opioids, and other important issues that are actually killing people. And, we will spend the following four years listening to politicians and pundits claim that the whole impeachment was rigged. So let’s move on to impeachment.

‘Sexually Explicit Text Messages’ — It is sad that the misguided family has turned this into a pro-gay thing. They are missing the core problem, namely foolish behavior in life and on social media.

Six years ago, when former Rep. Anthony Weiner was caught for the second time in a “sexting” scandal, I read my teenage son the Riot Act. “Never put anything in a text message you wouldn’t want to see on the front page of the New York Times!” I shouted at my son, then only 14.

As parents, we have a responsibility to warn our children about the dangers of communication technology, and I’m happy to say that so far — knock on wood — none of my kids have been implicated in any such scandals. You simply can’t be too careful about these things, when people are losing their jobs over social-media posts from years ago.

“Cancel culture” isn’t the only danger, however. A tragic story from Tennessee highlights the potential danger of text-messaging: A Tennessee teenager took his own life after being outed as bisexual by classmates who bullied him, according to his family.

Election Blacklist: YouTube Buries Viral Video of Hillary Clinton Lying For 13 Minutes Straight — Social media continues to manipulate our elections.  Even searching for the titles of certain videos won’t bring them up in search lists.

By the way, Hillary is definitely going to run again.  Pass the popcorn.