The Huffington Post is Horrified When a Lioness Kills Her Own Babies But Cheers When Humans do it — Always a good time to remind people that abortion is the ultimate child abuse.

WaPo: Four Pinocchios to Harris, Warren over Ferguson murder claim — This is a must-read, must-save link to share with the malicious and/or ignorant race-baiters who keep perpetuating the lie that Michael Brown was murdered.  It was suicide-by-cop all the way.  People like Harris and Warren know better, but they’d rather lie and divide the country as long as it profits them.

Witness 102: “Wilson then chased Brown with his gun drawn, but not pointed at Brown, until Brown abruptly turned around at a nearby driveway. Witness 102 explained that it made no sense to him why Brown turned around. Brown did not get on the ground or put his hands up in surrender. … Brown made some type of movement similar to pulling his pants up or a shoulder shrug, and then ‘charged’ at Wilson.”

Overcoming the Fear of Evangelism – So many great reasons to evangelize!  Side note: One of the saddest barriers to evangelism I’ve seen is when other “Christians” feel guilty about not evangelizing themselves so they try to make you feel like you are wrong for doing so.

We must STOP making worship leaders and thought leaders or influencers or cool people or ‘relevant’ people the most influential people in Christendom . . . we are in a dangerous place when the church is looking to 20 year old worship singers as our source of truth.

How would you know ‘what is good’ without Jesus’s teachings? And will your ideas of what is ‘good’ be different from year to year based on your experience, culture trends, popular opinion etc and furthermore will you continue year by year to lead others into your idea of goodness even though it is not absolute? I’m amazed that so many Christians want the benefits of the kingdom of God, but with the caveat that they themselves will be the King.

Two Illegal Aliens in Maryland Accused of Raping 11-Year-Old Girl — But of course the local government was anti-ICE.  You think AOC and others will Tweet lots of pictures and sad stories about this victim?

Buttigieg Names Unitarian Universalist Shawna Foster as Faith Outreach Coordinator — As if you needed more evidence that the gay “Christian” was a phony.  The Pervert Lobby can’t help themselves.  If they wanted to be better fakes they’d be orthodox on all other matters, but by God’s grace they are almost always full-blown “Christian” Leftists, denying the essentials and more at every turn.  Anyone following them is getting what they want and deserve.

‘Fredo’ is NOT the Italian Version of the N-Word — It is used to note that someone is weak and foolish.  I had never heard about people calling him Fredo, but now that’s the first thing I’ll think of when Cuomo is mentioned. Thanks, Streisand Effect! 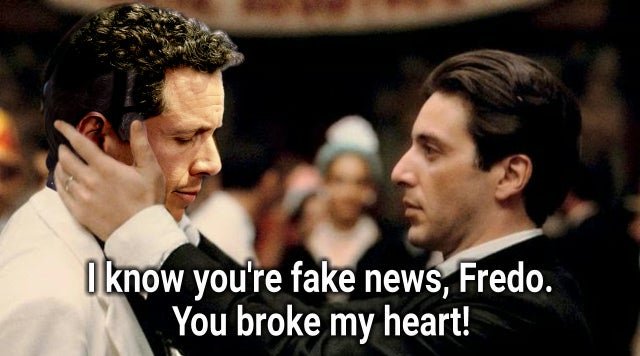 Bill Clinton: Epstein’s Cause Of Death Depends On What Your Definition Of ‘Suicide’ Is | The Babylon Bee

Courts Call for Co-Ed Locker Rooms in Minnesota and Illinois — Brought to you by the Left — including the “Christian” Left.

U.S. Lutherans Make Entire Denomination an Illegal Alien “Sanctuary” — They don’t believe in the rest of the Bible, so why would they agree with Romans 13?  They should bus all the illegals to their buildings.  That will leave them less time to spread their false gospel!