Texas Republicans Pass Save Chick-fil-A Bill, Democrats Call it Bill of Hatred — because the truth sounds like hate to those who hate the truth.  C’mon, they are just tasty chicken sandwiches!  When you wonder why the LGBTQX lobby loses their minds over Chick-fil-A – which doesn’t discriminate against sexual deviants in hiring or in serving, but merely had a CEO donate to pro-family causes – remember that the men of Sodom persisted even when being literally blinded by God.

Genesis 19:11 And they struck with blindness the men who were at the entrance of the house, both small and great, so that they wore themselves out groping for the door.

Seriously, if God literally blinded you while you were sinning, don’t you think you just might stop for a few minutes to reflect on what you were doing?  Not these people.  They are most persistent.  Don’t bother trying to pacify them, because nothing short of your annihilation will work.

Eight Reasons We Should Avoid Christian Conferences — I’m not saying all conferences are bad, but I have zero interest in attending any.  Two of the biggest reasons I’m not a fan:

4. Do conferences unnecessarily promote celebrity-driven evangelicalism? I’m aware of small conferences that focus on topics or particular doctrines, but let’s be honest…most conferences are all about the celebrity speakers and celebrity musicians. Do we really think that’s healthy in the long term? Did not Christ gift to every church their own pastors and teachers? Does celebrity access diminish and even disregard reverence and listenability to local pastors? Furthermore, because virtually anyone has access to the sermons preached by our favorite celebrity preachers in virtually any form of media (video-streaming, podcasts, etc…), why is it necessary to see them in person if it’s not for the fanboyism of it?

7. In regards to women’s conferences, let’s be honest. They’re garbage. They are total, complete garbage. They are emotionalized, doctrinally-shallow, motivational seminars that – by and large – mature godly women don’t attend to begin with. These events are often designed to literally lead captive weak women (2 Timothy 3:6).

Surprising No One, “Revoice” Conference Pastor Comes Out As Queer — The title says it all.  Don’t trust those who work so hard to affirm LGBTQX desires.  Again, the men of Sodom wore themselves out groping for the door even though blinded  by God.

People donating to Kenneth Copeland or Jesse Duplantis are getting what they deserve: Nothing.  Doesn’t Copeland look demon possessed?  What kind of a greedy idiot do you have to be to fund these frauds?  Wait, I think I just answered my own question . . .

Archaeologists Discover Giant Pope Hat Worn By Apostle Peter | The Babylon Bee — Great send-up.  The notion that Peter was the first Pope is absurd on many levels.  You’d never get that from the Bible.

Rep. Jackie Speier shouts her abortion as Sen. Hirono exploits eighth graders — Guess what?  I don’t care if Molech-worshiping ghouls don’t feel guilty about murder.  It is still murder.  Then there is this anti-science, anti-logic nonsense where the Senator from Hawaii pretends that that women don’t already have children when they have abortions.  If they didn’t have children inside them, they wouldn’t have anything to abort!  Such obvious fallacies, yet our media and politicians play along.

“And I asked the girls in that group of eighth graders: how many of you girls think that government should be telling us, women, when and if we want to have babies, not a single one of them raised their hands,” she continued.

And another politician said, “When are these legislators going to give a shit about the baby once it’s born?”  See the graphic for all the things wrong with that stupid argument. 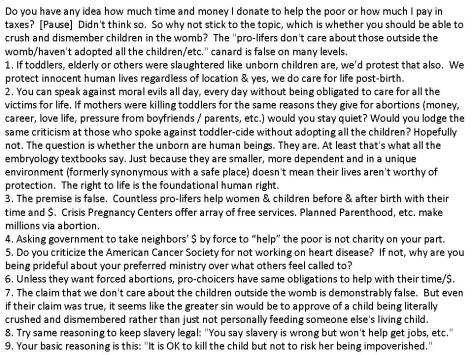 One more reason to dislike unions: American Airlines sues mechanics for 2,200 canceled, delayed flights .  This explains why I’ve had two American flights delayed for multiple hours on my last two trips.  They have great pilots, though!