Yes, they really are this anti-science. 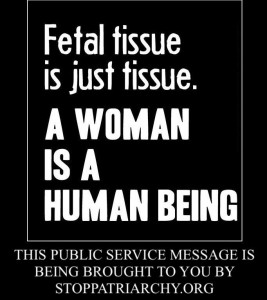 The “Stop Patriarchy” pro-abortion extremists are upset that people are seeing what Planned Parenthood is really like.  It will be interesting to see what comes of this: Radical abortion anarchists plan to counter pro-life Planned Parenthood protests.

In the mean time, please keep reminding people that pro-life = pro-science.  Pro-life reasoning is simple and accurate: It is a scientific fact and basic common sense (what else would two human beings produce?) that a new human being is reproduced at fertilization. Seriously, go check out any mainstream embryology textbook. I’m too pro-science to be pro-choice. Based on the settled science, it is then simple moral reasoning that it is wrong to take the life of an innocent human being without proper justification, and that is what happens during 99% of abortions.e situations surrounding abortions are psychologically complex (pressures on the mother to abort, economic concerns, etc.) but morally simple (you don’t kill unwanted humans outside the womb for those reasons, so you shouldn’t kill them inside the womb for those reasons). Their size, level of development, location and degree of dependency are not reasons to ignore their right to life. Arguments about “bodily autonomy” ignore the body destroyed in the abortion.

In other words, it is wrong to take the life of an innocent human being without proper justification. Abortion does that. Therefore, abortion is wrong.

A few examples of what science says:

MODERN TEACHING TEXTS ON EMBRYOLOGY
The Developing Human
“Human development begins at fertilization, the process during which a male gamete or sperm (spermatozoo developmentn) unites with a female gamete or oocyte (ovum) to form a single cell called a zygote. This highly specialized, totipotent cell marked the beginning of each of us as a unique individual.”

“A zygote is the beginning of a new human being (i.e., an embryo).”

Keith L. Moore, The Developing Human: Clinically Oriented Embryology, 7th edition. Philadelphia, PA: Saunders, 2003. pp. 16, 2.
Medical Embryology
“Development begins with fertilization, the process by which the male gamete, the sperm, and the femal gamete, the oocyte, unite to give rise to a zygote.”

T.W. Sadler, Langman’s Medical Embryology, 10th edition. Philadelphia, PA: Lippincott Williams & Wilkins, 2006. p. 11.
Before We Are Born
“[The zygote], formed by the union of an oocyte and a sperm, is the beginning of a new human being.”

Keith L. Moore, Before We Are Born: Essentials of Embryology, 7th edition. Philadelphia, PA: Saunders, 2008. p. 2.
Human Embryology and Teratology
“Although life is a continuous process, fertilization (which, incidentally, is not a ‘moment’) is a critical landmark because, under ordinary circumstances, a new genetically distinct human organism is formed when the chromosomes of the male and female pronuclei blend in the oocyte.”

William J. Larsen, Essentials of Human Embryology. New York: Churchill Livingstone, 1998. pp. 1, 14.
OLDER TEACHING TEXTS
Patten’s Human Embryology
“It is the penetration of the ovum by a spermatozoan and resultant mingling of the nuclear material each brings to the union that constitues the culmination of the process of fertilization and marks the initiation of the life of a new individual.”

Clark Edward Corliss, Patten’s Human Embryology: Elements of Clinical Development. New York: McGraw Hill, 1976. p. 30.
Biological Principles and Modern Practice of Obstetrics
“The term conception refers to the union of the male and female pronuclear elements of procreation from which a new living being develops.”

“The zygote thus formed represents the beginning of a new life.”

J.P. Greenhill and E.A. Friedman, Biological Principles and Modern Practice of Obstetrics. Philadelphia: W.B. Saunders, 1974. pp. 17, 23.
Pathology of the Fetus and Infant
“Every time a sperm cell and ovum unite a new being is created which is alive and will continue to live unless its death is brought about by some specific condition.”

E.L. Potter and J.M. Craig, Pathology of the Fetus and the Infant, 3rd edition. Chicago: Year Book Medical Publishers, 1975. p. vii.
GENERAL AUDIENCE TEXTS ON PRENATAL DEVELOPMENT
Beginning Life
“Every baby begins life within the tiny globe of the mother’s egg… It is beautifully translucent and fragile and it encompasses the vital links in which life is carried from one generation to the next. Within this tiny sphere great events take place. When one of the father’s sperm cells, like the ones gathered here around the egg, succeeds in penetrating the egg and becomes united with it, a new life can begin.”

The Biology of Prenatal Develpment, National Geographic, 2006.
In the Womb
“The two cells gradually and gracefully become one. This is the moment of conception, when an individual’s unique set of DNA is created, a human signature that never existed before and will never be repeated.”

“I have learned from my earliest medical education that human life begins at the time of conception.”

“After fertilization has taken place a new human being has come into being. [It] is no longer a matter of taste or opinion…it is plain experimental evidence. Each individual has a very neat beginning, at conception.”

“By all the criteria of modern molecular biology, life is present from the moment of conception.”

“The beginning of a single human life is from a biological point of view a simple and straightforward matter – the beginning is conception.”

Physicians, biologists, and other scientists agree that conception marks the beginning of the life of a human being – a being that is alive and is a member of the human species. There is overwhelming agreement on this point in countless medical, biological, and scientific writings.11

The American Medical Association (AMA) declared as far back as 1857 (referenced in the Roe. vs. Wade opinion) that “the independent and actual existence of the child before birth, as a living being” is a matter of objective science. They deplored the “popular ignorance…that the foetus is not alive till after the period of quickening.”