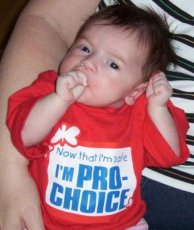 One of my favorite techniques to use when debating pro-choicers is to highlight how pro-life views are in concert with science and how their views are not.  It is easy to demonstrate the scientific fact that life begins at conception.  They may try to argue that but will look pretty foolish when confronted with all the mainstream embryology textbooks that state otherwise (not to mention common sense as well as concessions of the point from so many people on their side).

Then they may shift to “personhood” arguments (i.e., “OK, the unborn are human beings, but they aren’t persons yet so abortion is morally neutral or even a moral good”).  Then you just point out that they are using philosophical arguments – and weak ones at that – and have ignored the clear facts of science.

You, on the other hand, are firmly on the side of science.  Note all the good things you’ve accomplished:

1. It bursts the myth that you’re anti-science.

2. It bursts the myth that you just are just pushing your religious beliefs on them.  You haven’t even mentioned Jesus (Though if they want to talk about him you’d be glad to).

3. It shows them how they have taken an anti-science position on this vitally important topic and have completely abandoned the “we only trust what science tells us” falsehood.

Remember that these are powerful arguments.  Don’t use them in a heavy handed way . . . unless you are dealing with a really irritating person on a blog.  Just kidding!  Probably!

Seriously, politely weave them into the conversation and see it if resonates with them.  Remember that members of the media are 90+% strongly pro-abortion so people have gotten away without being challenged on bad pro-abortion reasoning for a long, long time.  It may take them a little time to see the light and admit their errors.  At a minimum you’ve given them something to think about and disarmed them of some of their favorite bad arguments against you.

Just calmly tell them, “I’m too pro-science to be pro-choice.”

P.S. Yes, I’m aware that my critics will respond with comments like this one.

You’re “too pro science to be pro choice.” Well, sure. Science agrees with you on that topic. Funny how science goes out the window on others, though.

I reject the bad philosophy* that perverts one sub-branch of one of the dozens of branches of science.  That does not make me anti-science.  Neither does questioning the power-grabbing / subject-changing politics of “climate change.”**

As always, remember that forgiveness and healing are possible for those who have participated in the abortion process.

I’m also too pro-science to be pro-porn.

*Atheist scientist Richard Lewontin’s quote is a classic example of Darwinist question-begging philosophy — that is, assuming what they claim to be proving:

Our willingness to accept scientific claims that are against common sense is the key to an understanding of the real struggle between science and the supernatural. We take the side of science in spite of the patent absurdity of some of its constructs, in spite of its failure to fulfill many of its extravagant promises of health and life, in spite of the tolerance of the scientific community for unsubstantiated just-so stories, because we have a prior commitment, a commitment to materialism.

It is not that the methods and institutions of science somehow compel us to accept a material explanation of the phenomenal world, but, on the contrary, that we are forced by our a priori adherence to material causes to create an apparatus of investigation and a set of concepts that produce material explanations, no matter how counter-intuitive, no matter how mystifying to the uninitiated. Moreover, that materialism is absolute, for we cannot allow a Divine Foot in the door.

Climate change has become a powerful political force for many reasons. First, it is universal; we are told everything on Earth is threatened. Second, it invokes the two most powerful human motivators: fear and guilt. We fear driving our car will kill our grandchildren, and we feel guilty for doing it.

Third, there is a powerful convergence of interests among key elites that support the climate “narrative.” Environmentalists spread fear and raise donations; politicians appear to be saving the Earth from doom; the media has a field day with sensation and conflict; science institutions raise billions in grants, create whole new departments, and stoke a feeding frenzy of scary scenarios; business wants to look green, and get huge public subsidies for projects that would otherwise be economic losers, such as wind farms and solar arrays. Fourth, the Left sees climate change as a perfect means to redistribute wealth from industrial countries to the developing world and the UN bureaucracy.

So we are told carbon dioxide is a “toxic” “pollutant” that must be curtailed, when in fact it is a colorless, odorless, tasteless, gas and the most important food for life on earth. Without carbon dioxide above 150 parts per million, all plants would die.