I’m running this again in (dis)honor of Andy Stanley caving to the LGBTQX agenda right when it profited him the most.  Via Megachurch pastor rejects his father’s bigotry: Jesus would want you to bake a gay wedding cake:

Gee, just because one group disagrees with something we can’t know the truth? Even Stanley doesn’t use that standard in any of his other quotes.

If you really love people you will tell them the truth. The Bible couldn’t be more clear. Bible-believing Christians and even two out of the three types of pro-gay people* (religious or not) can see these truths:

Having said that, I believe that Christians should support and encourage those who are fighting same-sex attraction. And no one needs to grandstand on the issue before getting to the Good News of the cross.

Here are some more weasel words from Stanley. Yes, people claiming the name of Christ should do less of those things, but isn’t it convenient when he throws all Christians under the bus to curry favor with the LGBTQX extremists?

Yeah, and if all the false teachers shut up for a year it would feel different as well.

It is illuminating how the non-Christians commenting there agree with Stanley. Go figure. Churchgoers who support “same-sex marriage” have nearly identical views to the world. It shows who their real father is.

Jude 4 For certain people have crept in unnoticed who long ago were designated for this condemnation, ungodly people, who pervert the grace of our God into sensuality and deny our only Master and Lord, Jesus Christ.

Finally, as Erick Erickson pointed out, note in the article how Andy’s father’s church had to be protected from the LGBTQX people and not the other way around.

In a move that should have surprised no one, Rob Bell has come out in favor of “same-sex marriage.”  It reminds me of an episode of The Simpsons where the twins Terri and Sherri are speaking to Lisa:

Isn’t it amazing that the same day you got a pool is the same day we realized we liked you?  The timing works out great, don’t you think?

For Rob Bell and other people bailing on biblical truths, it goes like this:

Isn’t it amazing that the same day God told me that he changed his rules on marriage it made me more popular?  The timing works out great, don’t you think?

The link has the video of him explaining his “new” views (Poison Control recommends watching it if you are out of Syrup of Ipecac) where he not-so-subtly undermined the word of God and said how we need to get with the world’s changes, because God is doing something new blah blah blah.  He says we should work on the “real” problems, as if the problem of saving people from sin isn’t real.

Once again someone who mocks what God said in his word wants us to believe that God is telling him all his new ideas and changes.  Right.  I hope that all the youth groups that showed his videos are repenting.

Here’s a graph I made for Rob (the inspiration came from the World’s Best Sunday School Teacher):: 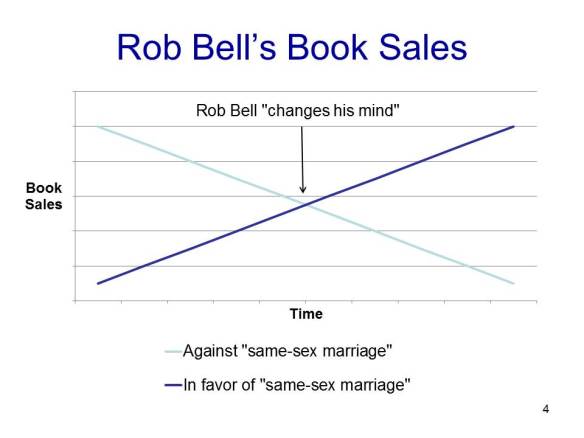 Think about this: Non-believers created the anti-abortion Hippocratic Oath and it took Satan 2,500 years to convince pagans to discard it.  Then it took another 15 minutes for theological Liberals to go pro-abortion.

Isn’t it amazing?  What great timing!  The liberal church realized it had been wrong on these important topics for nearly two thousand years, and came to that conclusion at virtually the same time as the secular culture.  That makes the world like them more, I suppose.

They also decided it was too embarrassing to believe in miracles, the authority of scripture, the exclusivity of Jesus, etc.  Or did that come first?

Thankfully, many churches in the West aren’t buying it and most of the churches outside the West aren’t either.  The first time I was in Kenya one of the full-time missionaries, a doctor from England, kept saying how the Kenyans were really disappointed in the U.S. when they heard about churches supporting gay “marriages.”   It wasn’t like they were thinking, “Gee, those brilliant Westerners know everything, perhaps we should follow them.”  It was more like, “Whoa, what are they thinking?!”

1. “The Bible says homosexuality is wrong but it isn’t the word of God.” (Obviously non-Christians)

2. “The Bible says it is wrong but God changed his mind and is only telling the theological Left.” (Only about 10 things wrong with that.)

3. “The Bible is the word of God but you are just misunderstanding it” (Uh, no, not really.)

3 thoughts on “Rob Bell, Andy Stanley, Terri and Sherri from The Simpsons, and perfect timing”