Yes, Time Magazine published “Christian” Left false teacher Mark Sandlin’s “10 things Christians shouldn’t do at Christmas” list.  If you expected legitimate theology from them then you were probably surprised at the Noah movie.  You don’t make money or get attention preaching biblical theology.  That didn’t make money 2,000 years ago and doesn’t make money today.  It is called the wide road for a reason (See Osteen, Joel and others.)

If you were a real Christian, wouldn’t you use an opportunity like that to glorify the King of Kings and Lord of Lords and your Savior, and to celebrate his entry into his creation?

Time’s editors are as ignorant as Sandlin about the Bible, as they let this part about Herod and the Magi through. (Apparently they were too busy enamored with Sandlin’s “original” pronouncement that Jesus was really born on December 25.  I’m glad he pointed that out for the three people in the U.S. who didn’t know it.)

What we do know is they were foreigners and their revealing of the king’s plans to kill all newborn boys in hopes of putting an end to Jesus turned Jesus’ family into immigrants in Egypt.

Huh?  That’s not what the Bible says at all.  How could he make such a silly mistake?  Oh, because he was reading his politics-disguised-as-religion lies into it:

Matthew 2:11–16 And going into the house they saw the child with Mary his mother, and they fell down and worshiped him. Then, opening their treasures, they offered him gifts, gold and frankincense and myrrh. And being warned in a dream not to return to Herod, they departed to their own country by another way. Now when they had departed, behold, an angel of the Lord appeared to Joseph in a dream and said, “Rise, take the child and his mother, and flee to Egypt, and remain there until I tell you, for Herod is about to search for the child, to destroy him.” And he rose and took the child and his mother by night and departed to Egypt and remained there until the death of Herod. This was to fulfill what the Lord had spoken by the prophet, “Out of Egypt I called my son.” Then Herod, when he saw that he had been tricked by the wise men, became furious, and he sent and killed all the male children in Bethlehem and in all that region who were two years old or under, according to the time that he had ascertained from the wise men.

Did this “reverend” actually read the texts he is referring to, or was he so eager to make his illegal immigrant point that he didn’t bother?  That’s rhetorical.

And why does Sandlin deny the virgin conception, which is explicit in Matthew while making up the part above?

And of course, the tone-deafness of the pro-abortion extremist Sandlin kept him from seeing the morbid irony saying this:

Christmas should cause Christians to recommit to confronting those who abuse power.

A real Christian got the following comments through for about 5 minutes on the the “Christian” Left Facebook page.  Note how the moderator there immediately went into straw-man / ad hominem mode, accusing Brian of claiming to fully understand every nuance of the Trinity and therefore being a liar. Captain Obvious says, just because you rightfully note that denying Jesus’ divinity is a clear denial of the Trinity doesn’t mean you claimed to be a scholar (although everyone looks pretty scholarly compared to Sandlin et al).

Oh, and the moderator forgot that Sandlin also wrote No Trinity For Me, because his Jesus is Not my God piece apparently wasn’t clear enough. 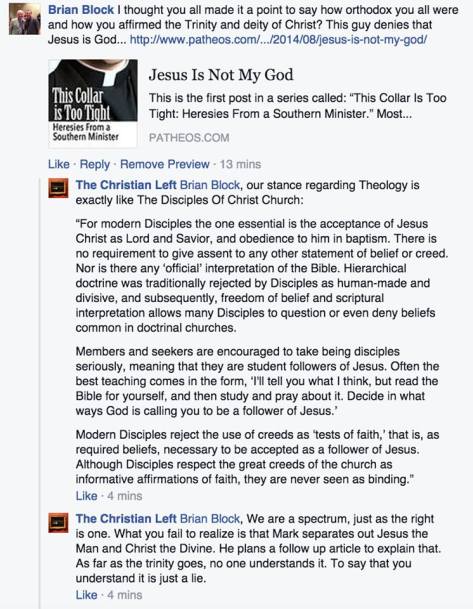 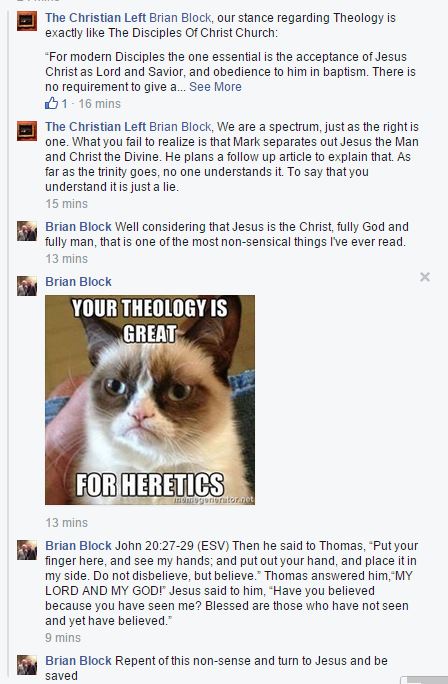 *Feel free to insert your own preferred legitimate scholar in the title.  Sproul came to mind because a friend at work (new Christian!!) is eagerly going through his systematic theology audio recordings.