Note: The message here is more important than the title indicates.  I’ll eventually share how Leftists literally fail at basic economic concepts and how that has enormous implications for every aspect of society.

I am not making this up: My dog once submitted a college test in Economics and passed.

OK, there is a little more to the story.

When my youngest daughter home-schooled her last two years of high school, the dogs would hang out with her all day.  Once when she was in the middle of an online Economics test one of them jumped on the bed, landed on the keyboard and submitted the partially completed test.  And he passed!  Fortunately, the folks at the school were good sports about the high-tech version of “the dog really ate my homework” story and re-opened the system so the that real student could complete the test (she got her usual 99% or so).

But I offer that as a segue to remind people of an extremely important fact about basic economic principles, namely that those on the Left literally fail at them.  They aren’t just a little worse than Conservatives, they fail horribly and it drives their ideology.  The details are here, but note the results of a simple eight question economics test given to those across the political spectrum (and especially note how my dog fared):

Here’s an example of one of the questions:

Consider one of the economic propositions in the December 2008 poll: “Restrictions on housing development make housing less affordable.” People were asked if they: 1) strongly agree; 2) somewhat agree; 3) somewhat disagree; 4) strongly disagree; 5) are not sure.

Basic economics acknowledges that whatever redeeming features a restriction may have, it increases the cost of production and exchange, making goods and services less affordable. There may be exceptions to the general case, but they would be atypical.

To recap that example, 2/3 of Leftists don’t know that restrictions — regardless of their merit — always increase costs.  How can they possibly make wise economic decisions?

Do not let the handsome canine below cause you to miss the key takeaways:

The way people understand basic economic principles has an enormous influence on how well they will govern.  You should vote accordingly.  And if you love God and neighbor you won’t ignore how He wired the world.

Economist Dog (TM), the hero of this story, could not be reached for comment.  He was on a conference call discussing how the demand for dog food is completely inelastic.   Also, he died in 2013.  We miss this special little guy!  He and his mate (pictured below) brought us countless blessings and good times and we thank God for that. 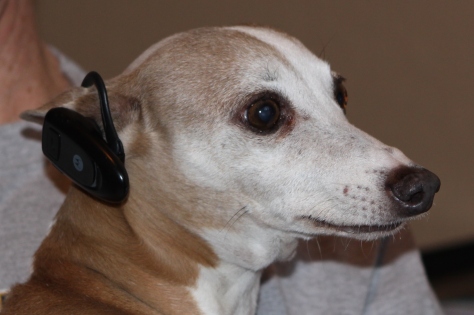 He also understood intellectual property rights and helped us earn a few $$ when the picture below was used on a t-shirt sold by a large retailer.  But mostly he just chased squirrels and then sat on my lap and slept.  Backup Dog (TM) was equally loved but not quite as active.

She was as cerebral as she looks here.

6 thoughts on “Who is better at economics: Leftists or my dogs?”