Steven Furtick is a super-creepy false teacher.  He seems like a mean version of Joel Osteen crossed with a cult leader. This was going to just be a one-liner in a roundup post, but I kept coming across more things about this guy and rapidly growing Elevation Church.

His “Hey Haters” video is comical for its hypocrisy.

He trots out other false teachers like Perry Noble to preach sermons about how great Furtick is, all the while claiming that God gave him that text to preach about Furtick, not Jesus.

Poor guy only has a 16,000 sq. ft. house. It is sad that his “church” is growing so fast and taking in a half-million dollars in weekly donations.

His church has sketchy baptism rituals.

Then there is this coloring assignment for kids at the church.  Yes, it is real.  Yes, he takes a verse about government and applies it to himself.  Yes, it is cult-like.  This reminds me of the episode from The Simpsons where Homer joins a cult (“The leader is great . . .”). 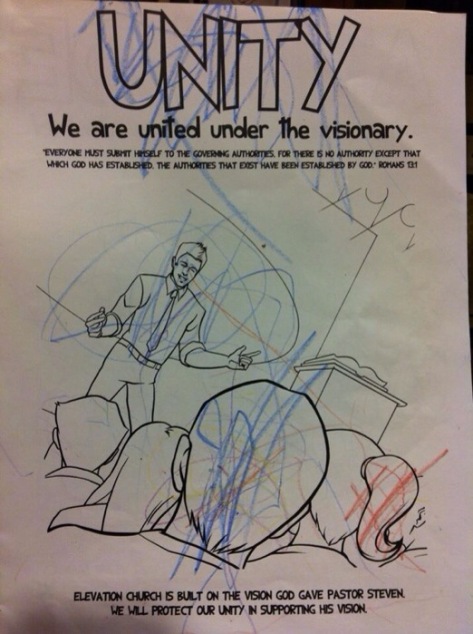 Update: Furtick knew about the book and loved it.

He actively discourages Bible study (surprise!) so his followers probably won’t catch on any time soon.  If only they would open the book . . .