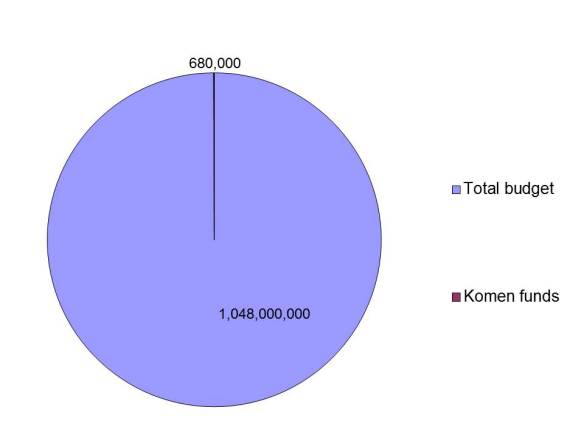 By which I mean, the donations were less than a rounding error.  That slide of the pie is actually smaller than it appears.  You have to triple the amount to make the shape grow.  Actually, it isn’t a slice of the pie at all, as the knife to cut the pie is wider than that.

So in response to that, PP and its radical pro-abortion supporters went on a scorched earth policy to destroy Komen.  They pretended to be all about women’s health — uh, other than the health of the victims of statutory rape and sex trafficking whose crimes they have been caught hiding, the health of all the females destroyed by abortion and the health of the women who will be hurt by the drop in donations to Komen.

Then Komen relented.  But as they are about to learn, their Netflix inspired strategy has doomed them forever.  Before, only some pro-lifers knew about the association with PP.  Now nearly everyone knows of it and pro-lifers won’t trust them.

It reminds me of the old story about the person who was convinced by a snake to pick him up and carry him.  After the naive person gets bitten he is reminded by the snake that he knew what he was picking up.  If you partner with people who kill innocent human beings for a living, don’t be surprised when they would rather see your charity destroyed than to give up point-zero-seven percent of their funding and to have anyone event hint that the death industry isn’t a swell place to be.

Here’s a comment that I left over at Hillbuzz that Kevin Dujan liked so much he added it to his post (he does great work over there battling the Leftists — be sure to check it out!):

Just when you think the Left couldn’t be more evil . . .

Let’s recap: A organization that kills innocent human beings for a living and its radical supporters were so offended by the elimination of a voluntary contribution by a non-profit dedicated to curing breast cancer that was a whopping 0.07% of their annual budget that they set out to destroy the non-profit, all the while claiming that they weren’t the ones politicizing the issue, that they were being bullied and that they were pro-women’s health. And the Leftist media supported them all the way, including perpetuating the Planned Parenthood CEO’s lies about them doing mammograms. Now Komen is distrusted and disliked by both sides and the Leftists are cheering their destruction.

The only good news is that others will think more carefully before getting involved with Planned Parenthood. Oddly enough, people who kill babies for cash or support those who do the same have some other unpleasant traits.