Hi – welcome to newcomers from the latest link(s) from other blogs.  Feel free to take a look around and comment if you like.

Here’s another example of what you’ll get lots more of if Prop 8 fails: School holds surprise ‘Gay’ Day for kindergartners.  Right out of the gay agenda playbook.

It is interesting that some people criticize those who have the audacity to take exception to the things being pushed on children.  The same rationale people use to criticize me for criticizing the gay lobby could also be used to justify showing pornography to kindergarteners.  After all, you don’t want moral busybodies trying to prevent the victimization of children, do you?  You’ll just hurt them all the more, right?  I mean, anyone who wants to protect the innocence of children must have a series of psychological problems, don’t you think?

But I probably shouldn’t use that pornography example with one of the guys pointing people to my site, considering what he considers normal in their parades and how he enjoys blogging about gay camping –  what with its fluid sleeping arrangements, tubes of lube on the picnic tables and dozens of naked guys in the pool.  And he claims to be a “Christian,” no less!  Of course, that guy thought that reading illustrated gay fiction to 2nd graders was a good thing and had no issues with kissing his “husband” in front of little kids.

This is what we are dealing with, people.  Sick.  Of course, this is also the guy who said I was “worse than an abortionist’ and had “blood on my hands” because I think that pushing condoms on kids gives implicitly and explicitly wrong messages.

And of course, he offers his favorite line of attack: If you criticize schools for teaching the normality of sodomy to 5 year olds then it must be because you are a closeted homosexual.  Uh, yeah, good logic there, folks.  I must also be a closet abortionist, pagan, tax-and-spend liberal as well.  (P.S. to my good buddy: It ain’t gossip if you quote someone off their blog on another blog, though it is a sin to make things up about someone and accuse them of things they have never said or done.  But I sincerely forgive you.)

But he does offer one insurmountable argument.  Maybe one day I’ll be clever enough to rebut it, but so far I’ve failed.  You see, he always refers to people like me as “wacky fundies” multiple times in each post.  So he must be correct in his views, eh?  And here I am, just stuck with facts and logic (Oh, and for authentic Christians, the Bible).

Such desperation.  It is a strong delusion.

P.S. I was amused that those who defended the field trip did so on the grounds that the parents signed permission slips.  Aside from the obvious peer-pressure issue, it misses the larger point: Even without field trips, just imagine the garbage they are pouring into these kids without parental awareness!

Be sure to read the comments of Joanne below, who proudly says that she pushes the gay agenda whether oxymornic “same-sex marriage” is legal or not.  Reason #13 to home school if you are in California.

Also see What Same Sex Marriage Does to Kindergarteners. 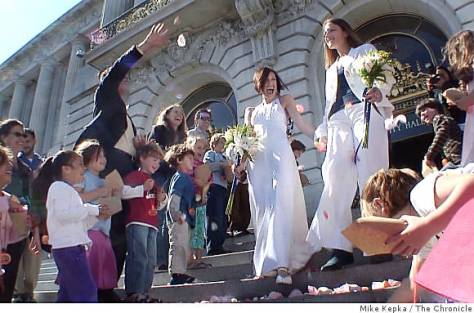 I hope Californians vote “yes” on proposition 8 before it is too late.  Read Field Trip Takes First-Graders to San Francisco City Hall for Lesbian ‘Wedding’

This is so disturbing. It is exactly what many of us have identified already and predicted would spread further wherever oxymoronic “same sex marriage” is made legal.  First graders are being fed the lie that this behavior is somehow normal and positive.

Some people try to deny the slippery slope argument, which is sometimes, but not always, a logical fallacy.  But things like this are exactly what one should expect when a few rogue judges override the will of the people and invent civil rights for sexual preferences.

Once this is legal then the state becomes an enemy of the church, because the church “discriminates.”  The state must give equal, or at least proportional time and space to these relationships in classes and textbooks.  Sadly, this whole process is aided and abetted by many fake and/or seriously confused Christians.

The San Francisco Chronicle ran this photo Oct. 11 by photographer Mike Kepka showing first-grade students from a local public grade school cheering their teacher’s lesbian “wedding.” This homosexual “marriage” “field trip” occurred just eight days after the Chronicle editorialized against the “fear tactics” used by pro-Proposition 8 forces in defending their proposed amendment preserving marriage in California as between a man and a woman. The newspaper had mocked a Prop 8 TV ad on the adverse effects of legal “gay marriage,” stating: “People would be sued on the basis of their personal beliefs! Churches would lose their tax-exempt status! Gay marriage would be taught in public schools!” The troubling photo above certainly contradicts the Chronicle editorial’s assertion that, “Public schools certainly would teach that same-sex marriage is legal, and the history behind it. But the value judgments surrounding matters of marriage and family would remain in the domain of home and church as they are today.” The school’s principal justified allowing the lesbian-wedding excursion to be considered a “field trip” on the basis that it would be a “teachable moment” for the young students.

Yes, it is teachable.  Another teachable moment is to show how God used behavior like this as exhibit A in the teaching that the sinfulness and rebellion in the world has turned the created order upside down.

Romans 1:18-33 The wrath of God is being revealed from heaven against all the godlessness and wickedness of men who suppress the truth by their wickedness, since what may be known about God is plain to them, because God has made it plain to them. For since the creation of the world God’s invisible qualities—his eternal power and divine nature—have been clearly seen, being understood from what has been made, so that men are without excuse.

For although they knew God, they neither glorified him as God nor gave thanks to him, but their thinking became futile and their foolish hearts were darkened. Although they claimed to be wise, they became fools and exchanged the glory of the immortal God for images made to look like mortal man and birds and animals and reptiles.

Therefore God gave them over in the sinful desires of their hearts to sexual impurity for the degrading of their bodies with one another. They exchanged the truth of God for a lie, and worshiped and served created things rather than the Creator—who is forever praised. Amen.

Because of this, God gave them over to shameful lusts. Even their women exchanged natural relations for unnatural ones. In the same way the men also abandoned natural relations with women and were inflamed with lust for one another. Men committed indecent acts with other men, and received in themselves the due penalty for their perversion.

Furthermore, since they did not think it worthwhile to retain the knowledge of God, he gave them over to a depraved mind, to do what ought not to be done. They have become filled with every kind of wickedness, evil, greed and depravity. They are full of envy, murder, strife, deceit and malice. They are gossips, slanderers, God-haters, insolent, arrogant and boastful; they invent ways of doing evil; they disobey their parents; they are senseless, faithless, heartless, ruthless. Although they know God’s righteous decree that those who do such things deserve death, they not only continue to do these very things but also approve of those who practice them.

Not surprisingly, you also get public nudity, sex and indescribable perversions out in the streets in San Francisco – Nancy Pelosi’s district, no less – and nothing is done by the police!  Will this be the next field trip for the 1st graders?  After all, it appears to be legal since nothing was done to stop it.

Or will the next field trip be to a Creationist Museum?  Probably so, if that is what the parents agree to, right?  Or would the “wacky liberals” complain about that, or would they be as creative in justifying the trip as they were this time?

If you are in California, please vote “yes” on proposition 8!

The good news buried in this atrocity is that it will show people what they will have – and more! – if proposition 8 fails.

P.S. I’m amused and encouraged that some EONs (self-described Enemies Of Neil) are linking to this post and using all their intellectual power to refute my arguments, mainly by using the phrase “wacky fundies” over and over and getting simple facts wrong, such as insisting that this public school was private.  Hard to argue with that, right?